Many readers will have noticed that the Church Clock in Stillington has in the past few months been giving the wrong time. This is despite the diligent care and twice weekly winding by Mr. Allan Hutchinson.

The clock has now been dismantled and removed for a full and extensive overhaul by clockmaker Mr G. Newey. Mr Newey's father, Richard, overhauled the clock in 1938 and it has given no trouble until the last few months.

Mr G.J.F. Newey, grandfather of the current clockmaker, rebuilt the clock in 1903. Nearly a century of excellent service has been provided by the same family. Richard Newey was a personal friend of the Hutchinson family and frequently visited Stillington in his BSA three wheeled touring car.

The present overhaul was felt by my brother Allan and myself to be a fitting memorial to our parents Mr and Mrs J.B. Hutchinson, in recognition of some 60 years devoted service to Stillington Church. A plaque erected in the choir vestry is being provided by the Stillington P.C.C.

The face restoration is now complete, having been repainted and gilded with gold leaf by Mr Newey and his assistant Mr Edward Bacon. A recent appeal has raised sufficient funds to pay for this and the refurbishment of the surrounding stonework.

My brother and I trust that after this restoration, many years of trouble free service and convenience will be enjoyed by all who 'seek the time'. 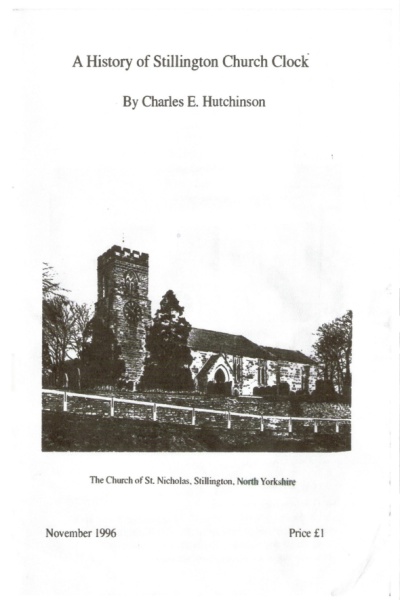 Early History of the Clock

There appears to be no record of when the clock was first placed in the tower or of the identity of the maker. Prior to 1869 this had been a one-pointered clock as was common in that period. The presence of the gold diamonds on the face between each hour confirms this.

On June 29th 1869 a meeting was held for the purpose of consulting parishioners concerning repairs needed to the clock. The churchwardens, Mr Wm Richardson and Mr T Hailstone, with a committee consisting of Messrs Robert Bosomworth, John Weatherill and John Richardson, obtained an estimate from Messrs Darling & Wood of York. This amounted to £10, with the addition of a minute finger and works, £7.10.0 extra.

On April 18th 1876 an estimate was obtained from Mr Henry Barker, clockmaker of Easingwold, for making the clock strike. At the same meeting the question of winding was discussed and Mr. John Russell, who lived next door to the church, was appointed to do this duty.

In April 1903 Dr Gramshaw, the village doctor, was thanked for his efforts in raising money for repairs. During this restoration the clock was almost entirely reconstructed by Mr G.J.F. Newey of York.

The restoration of the clock that took place in 1938 was undertaken by Mr Richard (Dick)* Newey and was necessary because the timber supporting the dial work on the inside of the tower had decayed. This meant a reconstruction of the wheel work connected with the pointers. The slave dial was added at this time. The minute hand is 3ft 11ins., long gilded with 24ct gold leaf. The hour hand measures 2ft 1in. also gilded. Mr J. Hutchinson made a wooden case to enclose the clock mechanism, complete with glass observation window, through which an accomplished eye could check the accuracy of the clock.

This is an extract from the parish magazine of September 1938, written by the vicar Rev. H. W. Smith.

"It is a truism to say that we do not appreciate anything until we lose it and this certainly is true of our Church clock. Day and night it ticks out the time for us, and strikes the hour with unceasing regularity, and above all we know that if the clock says 11-0pm that is the correct time.

Never have I known a church clock so reliable and accurate and this is due in no small measure to the indefatigable care of Mr [John] Hutchinson who does all the winding and regulating voluntarily and willingly.

As you are aware the clock ceased to function a short time ago and as soon as I returned from holiday I missed the familiar striking. I learned repairs were needed. Mr Hutchinson has kindly supervised them. He informs me that all the work has been done and the clock is once again in working order.

Mr Hutchinson has compiled this account for your information.

The whole of the dial work was found to be worn and the timber supports rotten. The timber has been removed and the dial work entirely reconstructed. This is now securely clamped to clock face by means of a steel tube and lock nuts.

The couplings driving the dial work were worn out after 35 years of continuous service and have been repaired by two new double univeral couplings of cast brass.

A new ratchet wheel has been fitted to the fans which govern the striking mechanism, all the main arbors have been rebushed, and the minute hand re-silvered.

The count wheel has been cleaned and the numbers stamped on it.

A new banker has been fitted to the striking gear, and the check-spring of the hammer reset.

The worn out cable of the striking train has been replaced.

The work is estimated to cost £10 and if a further sum of £3 could be provided it would be possible to fix a small minute dial in the choir vestry in order to give the exact time for bell ringing etc.

Mr Hutchinson offered to be responsible for the necessary woodwork if the improvements could be put in hand at once. The total sum required is about £13 and Mrs Newman [of Wellington House] has kindly undertaken the collecting of the money.

Roughly speaking it works our as 2/6 per house, and for this sum you are assured of always having the correct time at your disposal. I appeal with every confidence for this sum. Some people will be able to give a little more than the halfcrown and this will make it easier for those who find the giving of 2/6 a more difficult matter, but I do hope that we shall be ready and willing to do our share in the paying for the repair to our estimable friend- THE CHURCH CLOCK."

The clock has been totally dismantled. Firstly the pointers were detached from the clock face on the church tower some 26ft 6ins above the ground. Then the mechanism was removed from its case in the clock chamber. However, since it was too large to be brought down the tower intact, the iron frame holding the clock was dismantled so it would fit through the trap door in the  floor of the clock chamber. The pendulum (13ft 6ins), which has a two second arc (or swing) and a frame suspension to the bob, was removed from its case. Mr Geoff Newey was delighted to discover the following inscription on the reverse side of the bob.

The pendulum case had not been opened in subsequent restorations since 1903 so no one had known the existence of this inscription.

'The universal brass couplings driving the pointers have been cleaned and polished.

The ratchet wheel which controls the fans governing the striking of the clock have been remade.

A new click has been installed. The old click had worn to a razor blade thickness and if allowed to continue could have caused the disintegration of the clock.

All the arbors have been rebushed and the minute hand resilvered.

The count wheel has been repainted and polished.

The check spring of the hammer has been reset and both the steel winding striking train cables replaced with new ones.

The escapement has been rebushed, all pulleys etc. have been cleaned and the clock frame stripped and repainted.

The slave dial and mechanism have been cleaned and adjusted and further fine adjustments if necessary are to be made after the movement is replaced in the tower.

The pendulum frame has been cleaned and repainted and connection refurbished.'

The present restoration at the time of writing is well on the way to completion. The face restoration is complete and again has been finished with 24ct gold leaf.

Mr Allan Hutchinson and Mr Dennis Law have restored and painted the inner stonework of the face and the wall behind the pendulum case inside the  church. They have generally restored the clock chamber.

Miss K. Smith for her kind permission to use extracts from the parish magazines compiled by her father the Rev H.W. Smith.

Mr A. Hutchinson for assisting with research.

This booklet is dedicated to my late father Mr John Best Hutchinson of Stillington, York whose carefully kept records form the basis of my own research.

* Even though he was known as Dick Mr Newey's first name was Roland not Richard.

With thanks to Andrew Carter of the York Clock Group for these corrections. 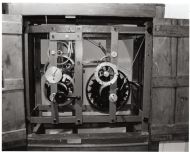