Immersion in the mill race

On Monday 19th October 1903 Sir Francis and Lady Winnington of Stanford Court, Worcestershire, accompanied by a valet and driver, were travelling by motor car from Northallerton to the residence of Lord Listowel at Settrington.

They were travelling through Stillington at seven that evening: it was a dark, wet and rather windy night and a powerful acetylene lamp had been placed at the front of the motor to help light the way. But it just wouldn’t work properly so the driver, Frank Noble (27) was obliged to put it out.  He now had to rely on two small side lights for illumination, so really couldn’t see properly and as he approached Stillington Mill followed some railings going to the right, when he should have taken the left hand turn. Suddenly the car plunged down a steep incline into the mill race. 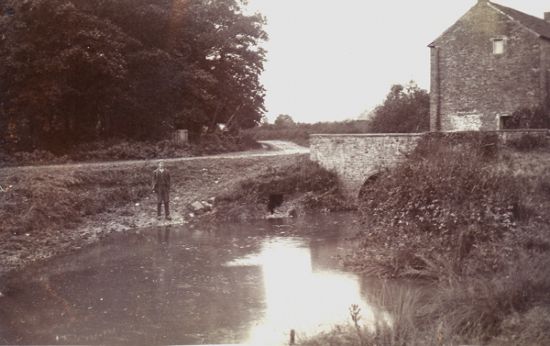 Sir Francis and his valet, who were riding in the back of the car, were thrown clear into the water: they were relatively unhurt. However Lady Winnington and Noble were less fortunate – they were trapped in over a metre of water under the heavy car, a 20 horse power Wolsey, which despite the combined efforts of Sir Francis and the valet wouldn’t move enough to free them. The two men shouted for help and were heard by the miller, William Gibson. With his men from the mill they managed to lift the car releasing Noble and Lady Winnington.

They were rushed into the mill house and medical aid summoned. When Dr Caister from Stillington arrived he found both Lady Winnington and Noble unconscious and in a serious condition.

Immediately he ordered that Dr Gramshaw, who was in York, be telegraphed. Both Doctors stayed with their patients all night and Mr Gibson did all he could.

Her ladyship had sustained three cracked ribs and concussion. She regained consciousness after seven hours. The chauffeur was less lucky. He had also sustained a concussion, but he had a fractured jaw. He remained comatose. His condition was described as ‘dangerous’.

By Tuesday evening, though, things were looking up. Both patients were fully conscious. It was reported that Lady Winnington was well pleased with the care she had received at the mill house, though moves were afoot to take her to Stillington Hall as soon as she was more recovered.

Sir Francis took it upon himself to praise their driver, to whom no blame was attributed. Noble was described as a steady man who had just returned from the Boer War.

Unfortunately after a flurry of reports in Newspapers up and down the country the story goes very quiet after 24th October.

By mid November Sir Francis and Lady Winnington were back home in Worcestershire. It was reported that they were recovered from their ‘immersion in a mill race’.

Note: Lady Winnington was a Churchill by birth and a cousin of Sir Winston Churchill.