A bazaar will be held in the grounds of Marton Vicarage near Stillington on Wednesday and Thursday, 23rd and 24th, for the benefit of the Farlington Church Restoration Fund.

Yesterday two large mushrooms were found in a field owned by Mr J L Pexton at Marton Lordship near Easingwold.  The circumferance of one was 2ft 6in and of the other was 2ft 10in. Both together weighed 2lb 3oz. It is more remarkable that because it is a field is one in which mushrooms seldom grow and this fungi is generally scarce.

Marton in the Forest Church

This quaint old church which has been closed during the past few months for restoration was opened by the Lord Bishop of Beverley on Friday Afternoon. Previous to the reopening of the church the bishop consecrated an additional piece of land which has been added to the churchyard. In the work of the restoration every effort has been made to preserve the ancient character, but many additions have been made which beautify the sacred edifice. The whole of the work has been carried out - under the direction of Mr Ewan Christian architect to the Ecclesiatical Commissioners - by Mr T Wood, Stillington, who successfully completed the restoration of Farlington Church two years ago. 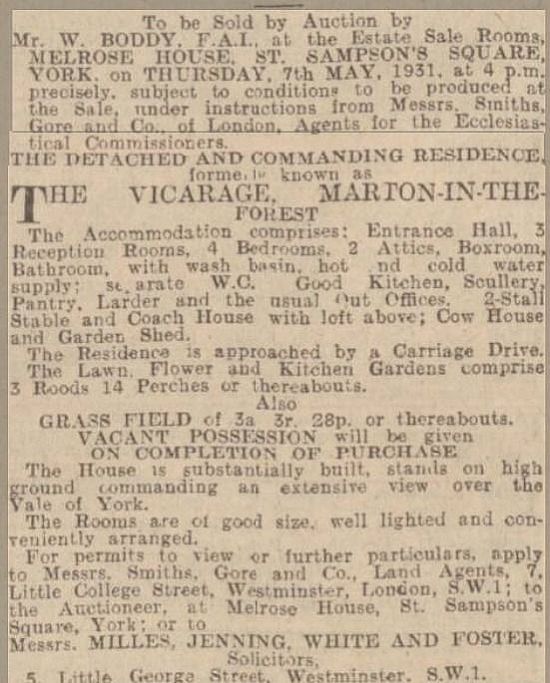