Late at the night on Thursday 20th December 1877 farm labourer James Howland was disturbed by a commotion near his cottage on West Lane, Stillington.

On investigation he discovered Police Constable Bell of the North Riding Constabulary lying at the side of the road covered in blood and in a semi-conscious state. Mr Howland helped the constable into his cottage and did what he could for him.

Assistance was sent for and shortly after midnight arrived in the form of Inspector Ellerby and a doctor, who after examining the PC pronounced his deep head wound, some three inches in length and extending into the bone, to be very serious and that he shouldn’t be moved. A few hours later when PC Bell’s condition worsened it seemed wise to take a statement from him.

On Thursday 20th December PC Bell was on duty, patrolling the high road between Stillington and Sutton on the Forest, when he heard someone chopping in a field near Stillington which was owned by Mr Ralph Appleby of Moxby. Knowing there was a large holly tree in that field he waited a short while and a man appeared on the road leading a dun coloured pony pulling a cart: the cart was piled high with holly. This man was George Marshall Earle, a 41 year old gardener’s labourer from Bramley near Leeds, but a native of York who knew the area well. PC Bell charged him with stealing the holly, at which time Earle said he didn't realise he was doing anything wrong. He said he would come quietly, hoping he might be let off, so PC Bell didn't handcuff him. Leading the pony the PC started to take his prisoner to Easingwold.

At some point during the journey Earle suddenly produced a bill hook he had kept hidden and threatened PC Bell,  unexpectedly striking him through his cap, cutting his head. A scuffle broke out between the men during which Bell was cut further as he tried desperately to handcuff Earle. The men rolled into a ditch, at which time the PC weakening from loss of blood and unable to manage his prisoner, broke away from Earle who chased him. Finally, coming in sight of a house Earle took fright and ran away, leaving PC Bell to be found by Mr Howland.

Earle was captured the following day at a public house in Cattall by PC Ambler of Shipton, after he had been spotted on the road between Alne and Youlton and later crossing Aldwark Bridge. When questioned by PC Ambler he denied knowing anything about the assault on PC Bell.  He still had the pony and cart, but had dumped the holly, which was the cause of so much trouble, on the road.  However when he was examined there were signs that he had been in a fight and marks on his jacket cuff were consistent with an attempt to fasten handcuffs. PC Ambler then charged him with the assault on PC Bell.

Earle was taken to Easingwold where he appeared before the special court of the petty sessions held in the Magistrates Clerk’s office. After a short trial in which evidence was given that he had told the toll keeper at Wigginton he was going to cut holly at Stillington he was sentenced to a month in gaol for damaging Mr Appleby's shrubs. Having served that sentence he was sent for trial at Leed's Assizes.

There on 17th January 1878 he found guilty of assaulting PC Bell with intent to murder and was sentenced to ten years penal servitude. He was sent to Dartmoor Prison.

PC Bell, nearly recovered from his wounds, was awarded £10 in recognition of his bravery.

This case made the police nervous and any hint of an assault on a member of the North Riding Constabulary was retaliated against with sure and swift punishment. This probably led to case 2.

A note on George Marshall Earle: Earle went by the alias Earls. He had previous convictions. Based on his description in prison records he was a fighter. He had a broken nose and scars on his right eyebrow, head and collarbone.

After serving his sentence he went to live at Brafferton with his wife and daughter, before moving to Sessay where he worked as a market gardener.

(Compiled from articles in The York Herald, The Yorkshire Gazette, Sunderland Daily Echo and Shipping Gazette, The Luton Times and The Edinburgh Evening News)

On Saturday 12th March 1881 there occurred in Stillington, at least according to some local newspapers, a riot involving a large crowd of drunken men outside one of Stillington's public houses: The Boot and Shoe. A Police Constable, going about his lawful duty, was assaulted by this riotous bunch of inebriated thugs and left in fear of his life.

That Saturday afternoon it was noted that there was a strong police presence about the village. There was some sort of event taking place and the police always arrived at those times, on the look out for drunken trouble makers.

At some point an unnamed Police Constable went to the Boot and Shoe. There were a number of men in the road, on the Green and in the pub yard who, he claimed, were the worse for drink. He asked them to move on and while some obeyed others started an argument, mostly over whether they were in fact as drunk as the PC claimed and whether the pub yard was a public place or whether it was licensed premises. He tried to take their names. It was then a scuffle broke out: the PC was knocked to the ground, and 'set upon' by three men, so he said.

He called for assistance and when it arrived, the fight continued with another constable being shoved by the crowd, but when the sergeant in charge threatened to read the Riot Act most of the men dispersed.  Eight men were arrested that day, with a further two alleged drunks summonsed later, along with the landlord.

Three of the men detained were pointed out as the culprits who had knocked the PC to the ground. They all lived on Stillington Green and were: Thomas Scaife, a 27 year old married labourer; William Davill, a farm labourer aged 30, also married and Robert Spruce, a 25 year old plumber and glazier, who was single.

These three were brought before a special court at Easingwold held in the Magistrates' clerk's office (see case 1) and summarily sentenced to three months with hard labour at Northallerton House of Correction for assaulting one or more members of the North Riding Constabulary. 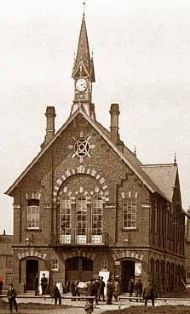 They weren't allowed a defence or witnesses. It was their word against that of the Police.

This was done so quickly and quietly that it was barely noticed by the Press  - all reports of the incident date from a week or two later when the Reverend Jemison, Vicar of Stillington, took up the men's case.

A petition, or memorial as it was called, was signed by Stillington residents and sent to the Home Secretary, Sir William Vernon Harcourt, by the Reverend Jemison on behalf of the men's families. It raised the issue of the secretive nature of the men's trial and the severity of their sentence, especially in light of the fact that both Scaife and Davill had wives and young families. It was quietly said that far from a huge crowd of men being involved in what had been termed by the press as a riot, in fact only a dozen or so men had been outside the pub at the time the PC approached them. The crowd, it was maintained, was swelled by men from around the Green who had gone to see what was going on.

In late April a reply was sent from the Home Secretary stating that, after examining all the evidence, the sentence would stand and that 'the police must be protected'.

The Press was scathing in its reports.  Scaife in particular was branded a trouble maker. It was then wilder versions of the events of 12th March were published.

More are brought to justice

The other men appeared before the Petty Sessions at Easingwold on 5th April. Andrew Dobson and William Bradley, labourers of Stillington, and Robert Foster, a blacksmith from Crayke, were found guilty of being drunk on licensed permises and fined 2s 6d with costs, despite a good defence from Mr Dale who also defended the remaining men who were charged with being drunk in the street. Richard Spruce, (Robert's brother), Thomas and William Gibson had their cases dismissed however William Fothergill, a shoemaker from Easingwold, was found guilty and fined 5s with costs, as was landlord Skelton Meyers - in his case for allowing drunkeness on his premises.

Picking up their lives

Scaife, Davill and Spruce served their three months and went back to their lives. The almost clandestine nature of their trial did, however, raise some eyebrows and was branded over zealous. Lessons were learnt. Later trials involving threatening behaviour towards the police were tried before a full court and with a conspicuous Press attendance!

(Compiled from articles in The Yorkshire Gazette and The York Herald, and from Home Office Documents)